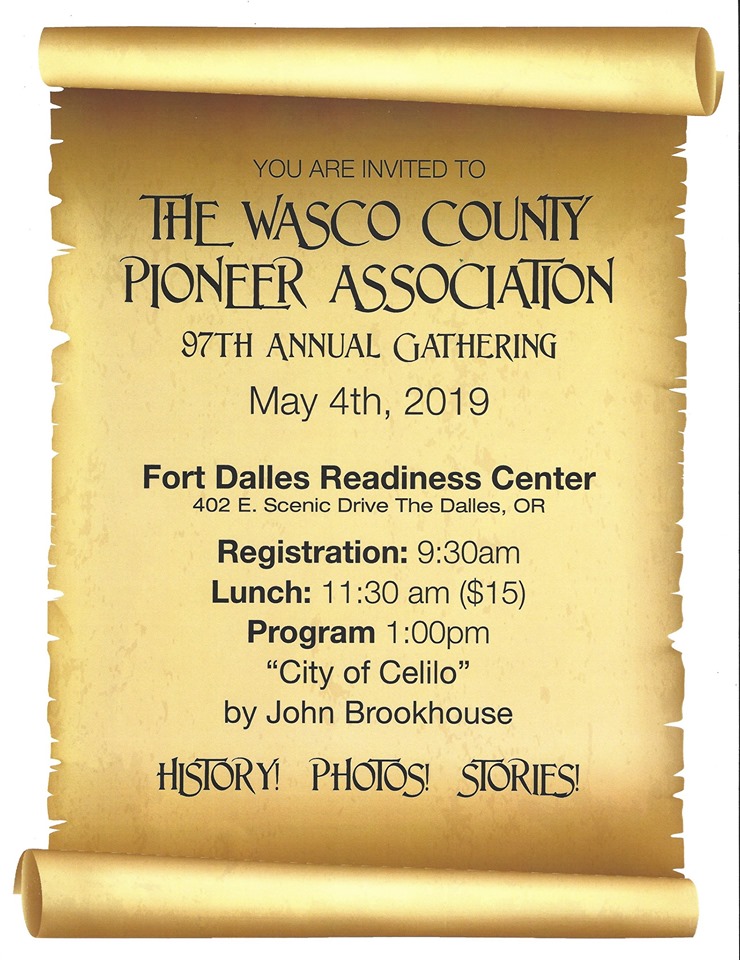 The 97th annual Wasco County Pioneer Association Meeting is this Saturday May 4 2019.

The meeting is being held at the Readiness Center
402 E. Scenic Drive in The Dalles, Oregon!
Registration begins at 9:00 am. Come early to look at all of the Pioneer Picture Boards. Lunch is served at 11:30 am ($15.00)

The program starts at 1:00 pm with a short business meeting followed by Mr. John Brookhouse who is speaking on “City of Celilo”.

This meeting is open to the public! Join us for Fellowship, Food and History!

The Wasco County Pioneer Association was founded May 2, 1922.  It was to celebrate and remember the thousands of pioneers who flocked to Wasco County via the Oregon Trail to garner their share of the region’s rich natural resources and Federal land grants.

From 1854 until 1859, old Wasco County extended east-west from the crest of the Cascade Mountains to the crest of the Rocky Mountains, and north-south from the Columbia River to the 42nd Parallel (the current northern boundary of California).

The Territorial Legislature created Wasco County on January 11, 1854. Old Wasco County covered 130,000 square miles, extending in a swath from the crest of the Cascade Mountains to the Continental Divide atop the Rockies. This made it the largest organized county in U.S.

History. It occupied a sizable part of Oregon Territory until 1859 when Oregon achieved statehood.

Wasco County was comprised of all of what is now Eastern Oregon, most of Idaho (southern part), a small part of Montana, and the part of Wyoming west of the Continental Divide, including a portion of what is now Yellowstone Park, all of the Grand Tetons, and the present city of Jackson Hole as shown in the accompanying map.

The county was eventually broken into the eighteen counties which now exist.